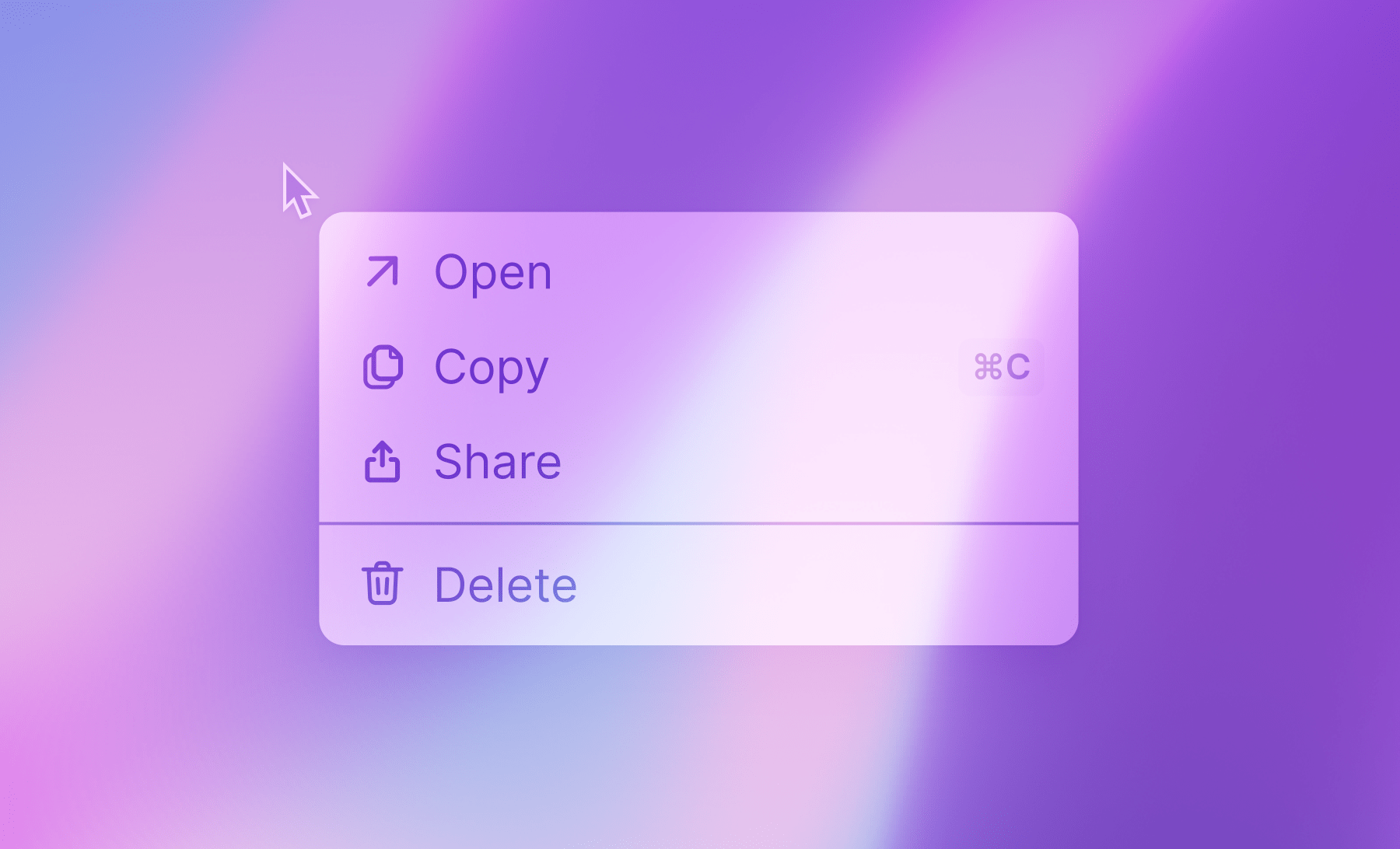 Context menus have existed for decades, from macOS to Windows, from Xerox Parc to the web. They’re a widely understood user interface concept, but many new apps still fail to deliver them at the standard users have come to expect.

Since the context menu paradigm has existed for so long and is so widespread, users anticipate them to behave in similar ways across platforms and apps. But in reality, they don’t! In fact, each new web app creates their own custom menus, and users have to relearn what is possible and what is not in each app. Moreover, just like with the best animations, a great context menu should feel so intuitive that users don’t even stop to think about it.

In this post, we’ll go through some of the basics, as well as some more advanced interactions, for building seamless context menus.

Context menus are menus that appear upon user interaction, usually from a right-click or clicking a button. They have many names (pop-up menus, dropdowns, contextual menus), but they usually look pretty similar across different operating systems and apps. What does differ — however — is how they behave during user interactions.

They may look simple, but context menus can actually be quite intricate. We’ll go through the details one by one to break down the context menu user experience.

There are two main ways to open a context menu these days: from a right-click, or from a button-click.

Here’s an example of opening a context menu from our app:

If there is enough space, context menus align their top-left corner to the bottom-left of the cursor or button. They’re extremely predictable, as they should be — a user should instinctively know where to move their cursor to next.

It’s also a nice touch to highlight what the context menu is attached to, so the user clearly understands what their selection will be applied to (see the examples above, where the task and button are highlighted while their menu is open). Look around, and you'll see this is actually also true on macOS and Windows when right-clicking a folder or file.

There are many instances where menus need to be repositioned as they approach an edge of the screen.

The consensus logic is to position the menu to the opposite side of the origin frame, which basically means inverting the horizontal/vertical axis to align menus.

One simple thing to do is monitor the window dimensions and re-layout the menus on the fly, so they can work in any situation.

Though it's so useful and seems obvious, type-to-select is a feature that's often forgotten in newer apps. The most common implementation is to listen for keystrokes and automatically select the first menu item that matches the same prefix. At Height, we build a solution using match-sorter to be more forgiving as people might miss a keystroke when typing fast.

Your context menu should be navigable through keyboard shortcuts. This is another one that seems unpredictable on the web these days, yet it's so obvious in retrospect. And of course, a nice little touch is to cycle through the menu when reaching the end of the options.

Give hints to the user

Something that makes context menus special is that they disappear right after being used. Adding some form of feedback after you’ve clicked an action is important to convey to the user that their action was successful. We stole the flashing indication from macOS, but there are many other ways to deliver a similar feeling of confirmation.

Copy-writing and information architecture might be the most important part of user interface. When it comes to designing the content of a menu, there are a few rules that are easy to follow to stay consistent and feel predictable to an user. Apple does a great job going through best practices around naming and organization menu. A few highlights:

Animations are often used as transitions from one state to another. They’re important because they help the user understand the link between their actions and their effects.

Context menus are user interfaces designed for productivity. Speed and predictability are extremely important, and animations can quickly obstruct these goals.

At Height, we decided to briefly animate the primary context menu, but disable all submenu animations. To us, it gives the user the best of both worlds: a way to better understand how a menu relates to its environment, while keeping complex menus a blast to navigate.

An interesting problem with submenus is: how do you access them with your cursor before they get disappear? Specifically, you would see this problem when moving your mouse diagonally towards the submenu.

There are different solutions to this problem:

Unfortunately, there are two issues with this solution:

Amazon used to have a big dropdown menu and it became famous for the way it toggled submenus while moving your cursor. The basic idea is to show the submenu while the cursor is within a safe triangle.

Here's a showcase of this concept, with the safe triangle visible for comprehension.

In some rare cases, context menus cannot be repositioned in a way that shows their entirety. There are two ways to avoid this problem.

macOS chose to let the user scroll through the menu using arrows, going through menu items one by one.

At Height, we didn’t like this solution as it is a bit cumbersome to navigate. Instead, we added a scrollbar into our menus that is shown when needed to let users know when a portion of the menu is hidden. We think this is a more modern way of solving this problem.

So as you can see, building context menus is quite a bit more complicated than it looks from the outside! Hopefully this guide will give you a better understanding of what goes into them, so you can more easily improve those that exist or implement future ones.

At Height, we're really passionate about these kinds of things, and the user interface and experience overall, so this guide was a fun one to put together. Drop us a line if there are any other things you're curious about seeing a breakdown of!

Centralize where decisions get made with Height — so flexible that everyone, from marketing to engineering and more, can use one tool to track their tasks together.

You’ll be in great company.